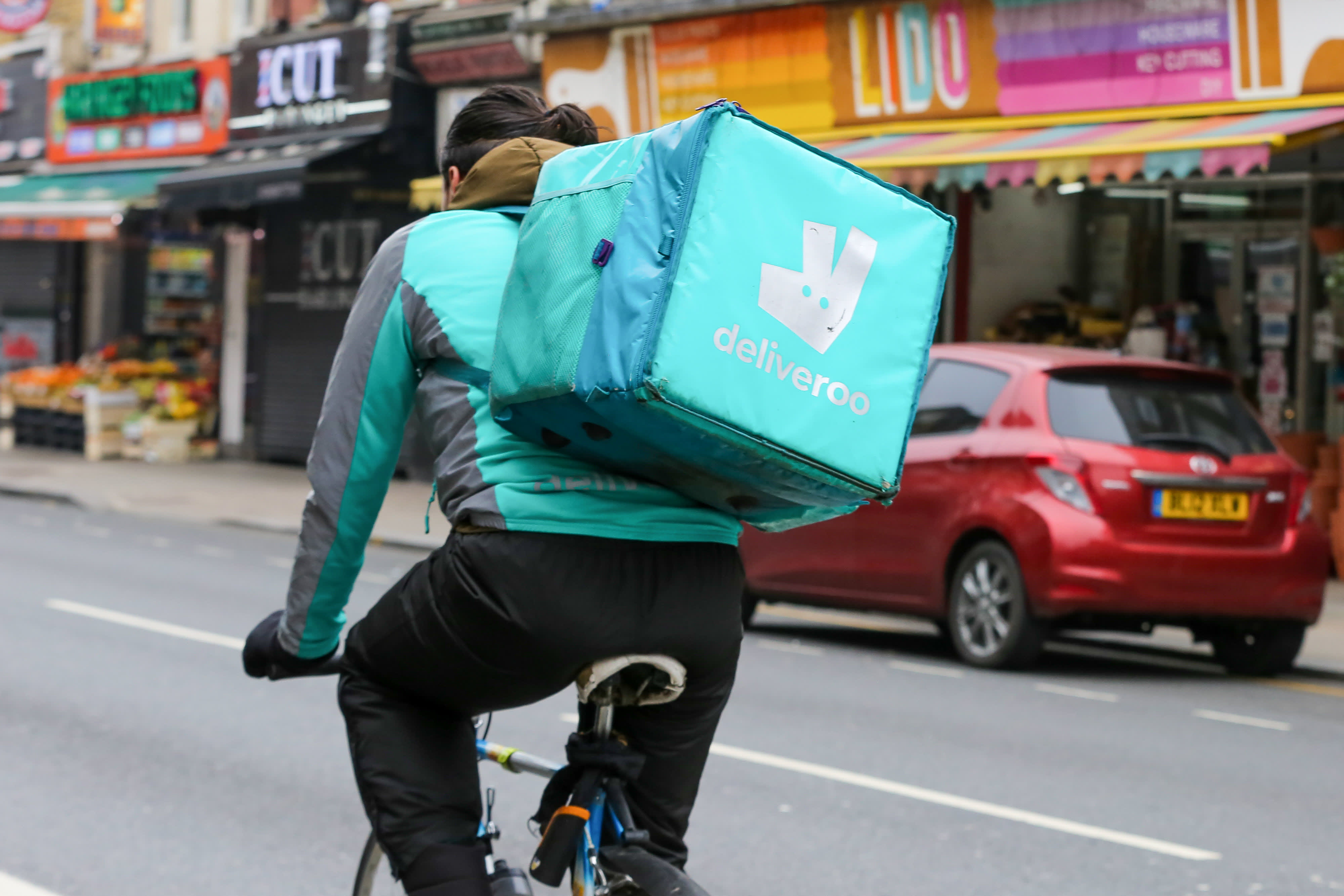 A Deliveroo cyclist in London, U.K.

Deliveroo, which is backed by Amazon, saw its shares sink around 30% in early deals compared to the issue price, before trimming some losses.

The company priced its shares at £3.90 ($5.36) Tuesday, giving it an expected market value of £7.59 billion, which was at the bottom end of its IPO target range.

Deliveroo is selling 384,615,384 shares, equating to an offer size of approximately £1.5 billion. Of that, £1 billion will go to the company itself and £500 million will go to existing shareholders, with Amazon and Will Shu, the company’s CEO and co-founder, among those set to gain the most.

The company’s shares began trading under the ticker “ROO” at 8 a.m. London time on Wednesday. JPMorgan and Goldman Sachs led the listing, while Bank of America Merrill Lynch, Citi, Jefferies and Numis were also part of the syndicate. Retail investors won’t be able to trade Deliveroo shares until conditional dealings end on April 7.

Sophie Lund-Yates, an equity analyst at Hargreaves Lansdown, said that Deliveroo’s price “isn’t quite as tasty as it was hoping for.”

“This isn’t hugely surprising given the substantial background noise surrounding the company,” she said.

“The biggest concern is regulation around worker rights. The flexible employee model of Deliveroo’s riders is a huge pillar of the group’s plans for success.”

Deliveroo’s IPO offer is the largest in the U.K. since e-commerce firm The Hut Group raised £1.88 billion in a listing last September. In terms of market cap, it is the biggest IPO to take place in London since Glencore went public nearly a decade ago. It’s also Britain’s largest-ever tech listing by value, surpassing that of The Hut Group and Worldpay which debuted in 2015 before delisting.

‘Next phase of our journey’

“I am very proud that Deliveroo is going public in London — our home,” said Shu in a statement. “As we reach this milestone I want to thank everyone who has helped to build Deliveroo into the company it is today — in particular our restaurants and grocers, riders and customers.”

He added: “In this next phase of our journey as a public company we will continue to invest in the innovations that help restaurants and grocers to grow their businesses, to bring customers more choice than ever before, and to provide riders with more work. Our aim is to build the definitive online food company and we’re very excited about the future ahead.”

It’s a major vote of confidence in London, as the U.K. capital looks to attract high-growth tech companies and boost its financial clout after Brexit. British Finance Minister Rishi Sunak described Deliveroo as a “true British tech success story” when the company announced plans to list in London.

However, the IPO has been hit by concerns over Deliveroo’s treatment of its drivers, the company’s governance and valuation. Legal and General, Aberdeen Standard, Aviva and M&A — which collectively have about £2.5 trillion in assets under management — have all shunned Deliveroo’s debut.

Each of the investment firms cited concerns about the gig economy in which Deliveroo operates. The company’s turquoise-uniformed couriers have become ubiquitous in London and other cities during the coronavirus pandemic, as people turned to food delivery apps for their groceries.

Some of Deliveroo’s riders are going on strike next Wednesday once its IPO opens up to retail traders, to protest what they see as poor working conditions and low pay. For its part, Deliveroo says its drivers are given flexibility to work when they want and earn £13 an hour on average during the busiest times.

That hasn’t cooled investor worries over Deliveroo’s business model, however. Earlier this month, Uber reclassified all its U.K. drivers as workers entitled to a minimum wage and other benefits after the country’s top court ruled a group of drivers should be treated as workers.

This is expected to result in higher costs for Uber — potentially to the tune of $500 million, according to Bank of America. Investors are worried that Deliveroo may suffer the same fate, and the company has set aside £112 million to cover potential legal costs relating to the employment status of its riders.

Meanwhile, institutional shareholders have also raised concerns with Deliveroo’s governance. The company is listing in London with a dual-class share structure, which gives Shu over 50% of the voting rights.

Deliveroo’s IPO will be a test of London’s tolerance for high-growth tech companies that spend heavily on growing at scale before prioritizing profits.

It’s a mantra that gained popularity in Silicon Valley with Amazon, which had initially been unprofitable for a number of years. Deliveroo remains heavily lossmaking, having reported a loss of £223.7 million million in 2020.

“Deliveroo is yet to turn a profit, which makes it very difficult to value on a traditional basis,” said Lund-Yates.

“But a market cap of £7.6 billion means the company’s worth 6.4 times last year’s revenue, which is some way above rival Just Eat’s 4.8 times, despite the lower price. That means there’s pressure for Deliveroo to deliver the goods, or its share price will be in the firing line.”

The company has managed to enter the black in recent months thanks to a rise in demand for food delivery.

But U.K. investors are worried by Deliveroo’s lofty £7.6 billion valuation, especially at a time when vaccines are being rolled out and countries are plotting a reopening of their economies. DoorDash, a U.S. rival to Deliveroo that went public last year, has a significantly higher market cap of around $42 billion.

Deliveroo warned it could have failed early last year as an investment from Amazon, its largest outside shareholder, was put on hold amid a competition review. Amazon’s stake in Deliveroo was later approved by regulators.

“A lack of blockbuster listings in London and pent-up investor demand during the pandemic have created encouraging market dynamics for Deliveroo,” said Nalin Patel, EMEA private capital analyst at PitchBook.

Nevertheless, several tech firms are flocking to London to list their shares, with the likes of Trustpilot and Moonpig having both done so recently. A number of other firms, including Wise and Darktrace, are expected to debut later this year.

Martin Mignot, a partner at Index Ventures, one of Deliveroo’s earliest backers, said London has the opportunity to become the “go-to” for European tech listings.

“Deliveroo is a big win for the capital, but much more has to be done,” he said. “Compared to U.S. listings, European founders still face more traditional public market investors who are not accustomed to backing high growth tech companies.”