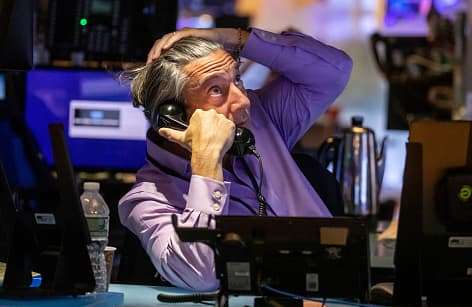 Apple was the biggest laggard weighing on the Dow, down 3.3%. The tech giant can no longer force developers to use in-app purchasing, a federal judge ruled Friday in a closely watched trial between Apple and Epic Games.

The S&P 500 and the Dow haven’t recovered since the poor jobs report last Friday, falling each day since, including all four trading days of this holiday-shortened week.

Investors are worried about persistent Covid cases slowing the economy just as hot inflation causes the Federal Reserve to take away easy policies.

“It’s been a week that’s really taken its cue from the delta variant,” said Jack Ablin, Cresset Capital Management’s founding partner and CIO. “Investors are wringing their hands over growth but are seeing higher inflation at the same time.”

The August producer prices index released Friday showed wholesale costs for businesses rose 8.3% on an annual basis, its biggest advance on record since at least 2010. The PPI accelerated 0.7% for the month, above the 0.6% Dow Jones estimate. The more important consumer price index for August will be released on Tuesday.

The Federal Reserve kicks off a two-day meeting on Sept. 21, and the Street will be watching for an update on the central bank’s bond-buying program. On Thursday, the European Central Bank left its monetary policy unchanged, but said that it will slow the pace of its asset-purchase program.

“The pace of policy changes will be gradual enough not to derail the economic recovery or the equity rally, while the differences between the more hawkish and more dovish central banks will create opportunities,” said Mark Haefele, UBS Global Wealth Management chief investment officer.

“We expect major central banks to remain supportive of growth, keeping rates lower for longer. This is positive for equity markets, particularly cyclical and value areas of the market,” he added.

President Joe Biden stiffened his stance on getting Americans vaccinated on Thursday, outlining a plan to mandate Covid vaccines for millions. Federal employees will be required to get a Covid vaccine and the president is asking the Labor Department to require employers with more than 100 employees to mandate vaccines or weekly testing.